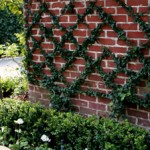 Espalier is the art, or process, of controlling plant growth in a flat plane, usually against a wall or fence, or along a trellis. This horticultural technique trains woody trees or shrubs through pruning and trying to create two-dimensional plants, often in specific patterns. Because a plant pruned in this way uses far less space, it is ideal for small gardens, and in narrow spaces where spreading trees or shrubs will not fit.

Some plants adapt better to the techniques of espalier than others. The best candidates have long, flexible branches and ornamental flowers or fruits. Fruit trees are the most common types. The intensive pruning directs energy away from vigorous vertical growth into the shorter, lateral fruit-bearing spurs, resulting in heavier yields than on ordinary trees. Some other advantages to espaliering fruit trees include being able to grow several different cultivars in the space of a single normal tree for greater diversity in fruit types and cross-pollination requirements; the trees bear earlier and for a longer time with deeper fruit color; fewer pest problems as air circulation is enhanced and any needed treatments are more easily applied; and harvest is much easier.

Apple and pear trees are the traditional espalier subject because their spurs live for years producing fruit (although certain cultivars are better than others) and they have supple, easily trained new growth, but other fruit trees that sometimes are espaliered include figs, cherries and apricots. As long as a woody plant has long flexible branches it can be used for espalier. Ornamental plants such as camellias, cotoneaster, flowering crabapples, flowering quince, forsythia, holly, magnolia, pyracantha, some viburnums, burning bush, and witch hazels are quite amenable to espalier. Even climbing roses or grapes could be used.

There are six traditional patterns used in espalier, with many variations on these basic designs. Normally only a single design is used within a landscape.

The different patterns are created by pruning to remove unwanted branches and training (forcing) others into the desired position. The highly symmetrical, formal designs require much more effort than the informal types. Some plants or cultivars are more suited to certain patterns than others because of their natural growth form, so will require less effort to train and maintain if well-matched. The more complex patterns take longer to develop.

Espaliers are trained on a strong supportive form of wood or galvanized wire. Almost any flat surface can be utilized: a wood or chain link fence, brick walls, the side of a garage, home or other building as long as a support structure can be attached to it. Free-standing trellises or even just wire stretched between posts can be used independent of a flat surface. Supports are placed in specific locations depending on the pattern and the plants are pruned and tied to the supports as they grow.

Espalier is a long and labor-intensive process, so this really isn’t suitable as part of a low-maintenance landscape. The basic framework of simple designs may be established in three or four years, while intricate designs will take longer. To develop your own espalier, choose a young tree without much branching, as this will require much less effort to manipulate. The main pruning is done annually in late winter/early spring when the plant is dormant (or after it flowers, if it is a spring bloomer) to remove branches that don’t fit the plan. Growth is redirected by pruning to buds that face the direction you want the plant to grow. Branches are moved into place and tied onto the supports in spring and early summer, while branches are still young, soft and easy to manipulate. This often has to be done gradually over a period of time each spring. The ties of soft string, strips of rags, rubber grafting bands, plant ties, or raffia should be checked periodically (every few months) and loosened if restricting growth or damaging the branch. The ties are removed once the final form has been achieved. Once the desired overall shape is achieved, it is maintained by simple, minor pruning once a month to remove all stray branches and twigs that are growing perpendicular to the flat plane or out of the pattern. Shape the plant every month or so, removing branches or twigs that aren’t in the correct plane of growth. Maintenance for espalier plants is the same as for normal plants of their type, except for the more intensive, regular pruning and shaping (which never ends).