Vermiculture or vermicomposting is the practice of using worms to aid in the breakdown and disposal of waste into viable, useful material. The end product of vermicompost is vermicast; worm casting or manure created from the digestion of materials. This process takes material that is not readily useful to either soil or plants and turns it into a nutrient rich and water soluble plant fertilizer.

Residential worm bins can be made out of several materials. The least common is metal; these transfer heat too readily and can be prone to rust. Wooden bins are okay but over time the wood will rot. Even resilient wood like cedar has its drawbacks; the resinous oils that prevent decay can actually harm worms. Bins made of used or recycled plastic tubs are durable, easy to work and are fairly inexpensive.

After some research and many alternate designs, I decided on a fairly simple worm bin system for my garden. It employs two plastic bins with lids, one must be able to completely fit within the other with room for a few bricks at the bottom of the larger bin. The inner (smaller) tub houses the worms and the bedding (a mix of shredded newspaper and soil). Before adding these I drilled small (1/8) drain holes in the bottom of the bin and drilled larger (1/4) vent holes in the lid. In the larger bin, I placed four bricks at the bottom and sat the smaller bin onto them. The main purposes of the larger bin is to protect the inner bin from excess moisture (rain), extreme temperatures, and to catch the liquid run off from the inner bin (often called ‘worm tea’).

The inner bin is the engine of the system. Kitchen (vegetable) scraps are buried into the bedding and both lids are closed. The amount of waste that your bin can handle ranges with temperature, food type (worms prefer different foods) and the species of worm one chooses. A widely used species of worm is Eisenia foetida, or Red Wiggler (I found my worms on Craigslist but a Google search will point you in the direction of many local sellers). These worms are voracious eaters and can handle the compact and hot nature of a worm bin. In contrast, our common earthworms need a cooler environment with the ability to migrate freely through a wide territory. Using the right worms in a balanced worm bin has many benefits. I have found that my bin is much less hassle than a compost pile (or bin), the breakdown is much faster and it creates a more concentrated useful fertilizing product. Also it is very convenient; I keep mine in the basement with no noticeable odor. This indoor placement provides both temperature and moisture control. Worms are most active with temperatures ranging from 55 and 75 degrees. The soil should be moist like a rung-out wash cloth; if too much moisture the bin can take on an acrid smell. Outdoor bins must be protected and can be susceptible to freezing, overheating; and flooding. I have placed my bin outside and exposed my worms to all of these conditions, and the worms don’t fare well. 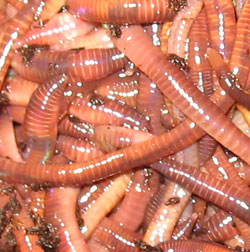 My worm bin has been going for nearly a year, in fact, I have split the one into two, but before this weekend I had never used the castings. I have read of multiple methods of separating the worms from the casting and these fell into two basic categories- one being hunger driven and the other being light driven. The basis behind the hunger driven is to stop feeding the bin and place a bin with food material on top to coerce the worms to migrate into the new space. I chose the light driven method of putting the contents into piles on a tarp outside, the worms move down in aversion to the light, the top material is skimmed off and the worms are gently returned to their bin. Although a little messy, this method of separation was quick and easy,. Soon I was mixing the castings into a raised bed in preparation for the growing season. Also, I diluted the worm tea collected in the outer bin and hit all of my edibles with a shot of home-made organic fertilizer. If everything I have read is true, I can look forward to vigorous plants and a great harvest!